The Legend of Zelda has had a lot of amazing bosses over the years. Let's count down the best 10!

With The Legend of Zelda always on the mind, I couldn’t help reminiscing on the franchise. After some thought, I came up with this simple top 10 for my favorite series, listing the best 3D bosses. Well, not entirely simple – pretty specific rules for this list I know. But I decided it was a bit unfair to compare the 2D bosses with the ones from the 3D era. Not to mention, between a ton of truly climactic moments with Ganondorf throughout the series, I didn’t want to bog down this list with the same character. So without further ado, these are the 10 3D bosses not named Ganondorf that have that stuck with me the most throughout my years of playing The Legend of Zelda.

Like a lot of great Zelda bosses, the fight with the witches Koume and Kotake is split between two very different, but fun sections. The battle starts easily enough, bouncing their fire and ice attacks back at each other. Until things quickly escalate and they combine and form Twinrova and the battle take a turn. Using the Mirror Shield to store and reflect her energy back at her is a great twist, turning Link’s defensive move into an attack. The sound of the shield further charging up with elemental energy with each successive absorb still makes me tense to this day. To cap it off, the twin sisters bickering as their ghosts slowly ascend after being defeated is a hilarious ending.

One of the most memorable moments of Majora’s Mask is the fight with the mechanical masked monster of Snowhead Temple, Goht. Even thawing it out of its icy prison first is an interesting way to start the boss fight. As it speeds up and races around the arena, you’ll be forced to don the Goron mask and roll along the track just to keep up with the giant bull creature. Maintaining your stamina by smashing through green jars while avoiding Goht’s attacks is a thrill. Not to mention, launching off ramps to strike him with your spiky Goron armor is a such a cool way to deal damage. This is one fight we wish the “Rule of 3” lasted a bit longer.

Though Skward Sword certainly had its ups and downs as far as Zelda titles go, there’s no doubt it has its share of memorable boss fights. It may be a bit of a technicality for my “no Ganondorf” rule, but the duel with Demise is so well done it couldn’t be ignored. Sword fighting with a flaming-haired demon in a lightning storm is perhaps the most anime The Legend of Zelda has ever gotten, and it’s a suitably climactic finale. Using a lightning-struck Master Sword to beat Demise is a visual treat, and the finishing blow left my jaw on the floor.

The first boss of the game and still one of the most remarkable. Gohma is both a throwback to Ocarina of Time and a stellar introduction to the new perils you’ll face in The Wind Waker. The first time playing the game, I assumed I’d be squaring off against the dragon Valoo at the peak of Dragon Roost Island. But surprise, we instead battle this massive insectoid leaping out of the volcano’s core. Swinging over the towering Gohma with the grappling hook is a cool spectacle. And they even manged to incorporate Valoo into the fight using his tail as a grappling point! Seeing each successive blow leave cracks in his armor is just as satisfying as the final slash at his eye to end the battle.

One great advocate for Skyward Sword’s motion controls is the battle with this six-armed automaton. You’ll have to use one of the game’s most interesting new items, the Whip, to beat this mechanical monstrosity. Intimidating as it is creepy, Koloktos made for a menacing enemy, as you whipped apart its limbs only to have them reattach and attack you again. The battle got even more exhilarating when it revealed it was able to walk, bringing down the room’s pillars with its massive sword strikes. Using its own huge sword to cut apart its limbs and weak spot gives an amazing feeling of true retaliation against this colossus.

Reminiscent of a Shadow of the Colossus style boss fight, the fight with Bilocyte is a battle of epic proportions. Engaging with this behemoth through the air on your loftwing made me wish there were more aerial battles like this one. Climbing up on Levias’ back to have a one-on-one tennis match with the parasite was just as fun, calling back to the familiar Zelda boss battle trope. Bilocyte made perfect use of the wide sky area and Link’s flight for a grand, picturesque fight.

The fight with Ganon’s kidnapping monstrous sidekick was long overdue by the time it arrived – and absolutely worth the wait. The Helmaroc King was an opponent always at the forefront of The Wind Waker. After being the one to start Link’s adventure after snatching away his sister, this battle had the weight of a final boss. First, you have to escape the rising water and avoiding his pecking attacks up the spiral staircase. Then, battle the bird king himself by shattering his mask to reveal his red, malicious eyes. Finally, keep attacking its exposed face until it explodes into a cloud of feathers above the Forsaken Fortress. After all is said and done, it’s one of the most memorable moments from the game by far. It almost made up for having to stealthily sneak around base, only to be thrown out after reaching the top earlier in the game. Almost. 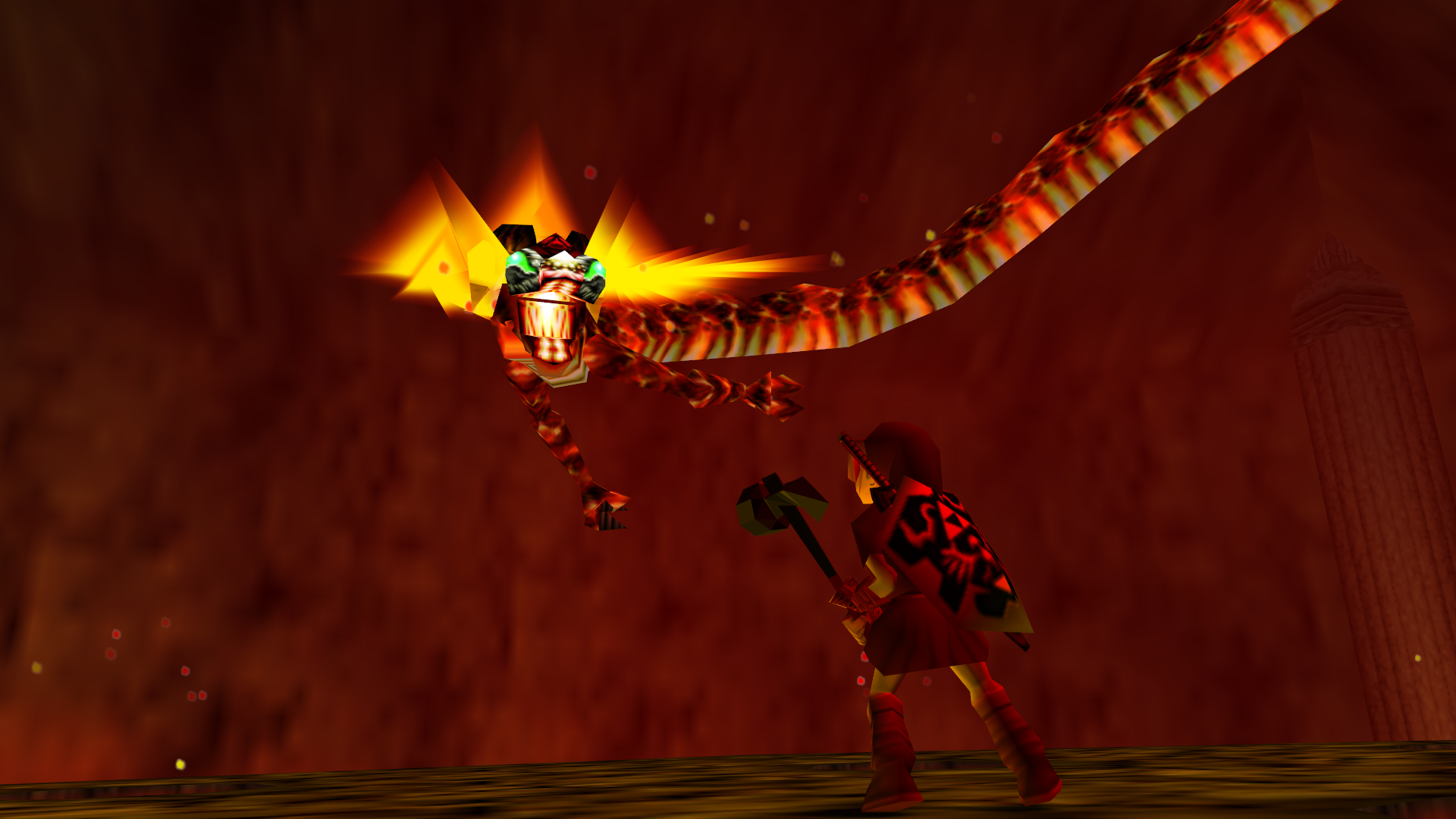 The boss at the heart of Death Mountain had a lot to live up to as the infamous Goron-devouring lava dragon. Thankfully, it did not disappoint. Erupting from the ground before taking off flying around the room spewing fire, Volvagia is a threatening sight. As the only dragons in Legend of Zelda up until this point had been tiny pixels, the battle against this massive fire breather was an enormous step up. Pummeling Volvagia with the mighty Megaton Hammer before it flew into the air felt like something out of a Greek epic. Reducing the beast to bones and freeing the lovable Gorons from its torment will always be a triumphant moment.

Okay, so I have a thing for dragons I guess. Climbing to the very top of the City in the Sky to fight the deadly Twilit Dragon Argorok made for a spectacular boss battle. Breaking his armor only makes the fight more intense, as the thunderstorm starts to grow around you. Eventually you’re forced to climb Argorok’s as it flies impossibly high in the sky, before stabbing him as he plummets towards the ground. Not to mention the Double Clawshots give Link an awesome Spider-Man feel.

The boss of Arbiter’s Grounds, Twilit Fossil Stallord, still holds up as the best Zelda boss fight. First, you have to use the Beyblade–like Spinner to circle the room of undead monsters to break apart its spine. Then, ascend the tower as his decapitated head starts to attack instead. It’s just so… metal! This boss fight was so rad, it used up every cool idea for the Spinner, because it was rarely used again after this. But it was worth it for this insane fight against the undead ancient beast, making it the best 3D Zelda boss.

But this is all entirely subjective and we all have our own favorites. Let us know which Zelda bosses resonated with you most too!