Since the instructions on how one celebrates this new holiday are rather vague – and I’m not about to go suit up and fight injustice on the streets of Toronto – it seemed to me that the best way to respect the Caped Crusader’s legacy was with a list of my favourite Batman stories across any medium: comics, animation, video games, you name it!

In Jeph Loeb and Tim Sales’ acclaimed 1996 series, an early career Batman unites with Jim Gordon and Harvey Dent to uncover the identity of an eluding killer who murders only once a month on holidays. The story was incredibly influential, too; film maker Christopher Nolan has cited the comic as one of the biggest influences for his Dark Knight Trilogy, as Batman’s alliance with Gordon and Dent as well as Dent’s fall from grace in The Dark Knight was ripped directly out of The Long Halloween.

I’ve always loved the “early years” stories of any superhero, and serving as a follow up in the timeline to Frank Miller’s Year One origin story, The Long Halloween marks the transition in Batman’s career from when his biggest enemies were mob bosses and drug dealers to having to face full fledged super villains like Two-Face and the Joker.

Above all, it’s a wonderfully written and beautifully drawn “whodunit” story that keeps you playing world’s greatest detective along side Batman as you flip from page to page. Definitely check this one out! 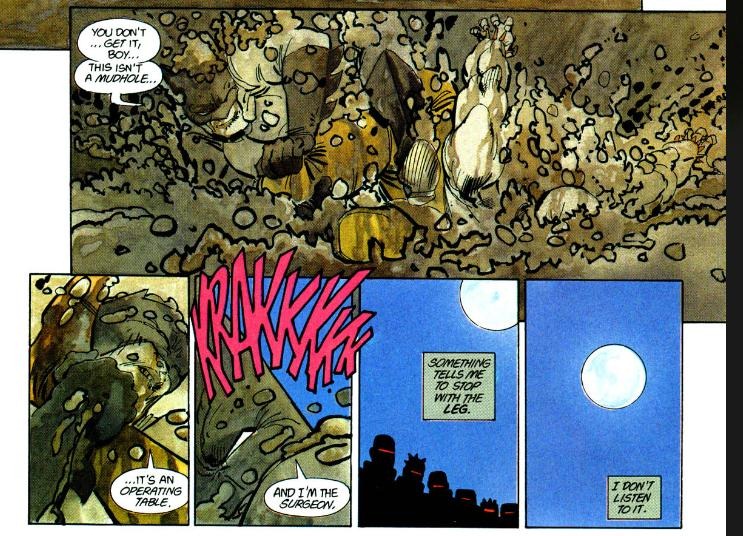 The only thing I love more than an early Batman story is an aging Batman story. 1986’s The Dark Knight Returns was the first time readers got to see what a life long battle against crime could do to a man, and in many ways the writers nailed the idea first try.

The story is a revelation that as hard as he may fight it, Batman will always be a part of Bruce Wayne. He comes out of retirement in search of “a fitting death” at a time when Gotham’s crime rate is worth than ever and no one else is willing to step in. Miller analyzes themes like the role of vigilantism, particularly in times of civil indifference, as well as a sort of chicken or the egg question regarding Batman and his enemies: is the Dark Knight really there to stop these super villains, or does his presence create and attract these hyper personalities?

Mask of the Phantasm had been my go-to Batman story throughout my childhood and teens. Clocking in at just over an hour and fifteen minutes, this film adaptation of the beloved Batman: The Animated Series managed to do so many things right in so little time. In the film, Bruce tries to unmask and apprehend a new killer the police force and others  have mistaken for Batman, while narrative flashbacks interlaced throughout the film reveal Bruce’s first love and the final tragic push that transformed an angry young man into the Dark Knight so many know and fear.

Masterfully voice acted by the likes of Kevin Conroy and Mark Hamill and with a slightly higher (and more violent) production value than its TV counterpart, Mask of the Phantasm was the epitome of writer Paul Dini’s work on Batman throughout the ’90s and early ‘2000s.

Say what you will about the game’s infuriating tank battles, but there’s no disputing that in Batman: Arkham Knight’s story, the stakes were never as high for Batman and his allies. The game’s story is one that dives deep into the psyche of Batman and forces him to question his decision to allow the people he cares for most to get involved in his destructive, life-risking crusade. Throughout the course of the game the fates of  those who follow Bruce – Oracle, Robin, Nightwing and more, are put in serious jeopardy. We see him wrestle with his greatest fears and failures, and feel a very real sense that Batman may finally be in too deep.

The cinematics, acting, and overall feel of the game were so well polished that despite a few hiccups like an over reliance on the Batmobile and some predictable story beats, developer Rocksteady succeeded in letting me live out my lifelong dream of feeling like I am the Batman.

All of the previous entries on this list exemplify elements of Batman’s persona like his detective skills, combat, and resilience, but this final Batman story shines for revealing the humanity of Bruce Wayne. While technically an episode of Justice League, the “Epilogue” is really the spiritual series finale to both Batman: The Animated Series and its sequel, Batman Beyond. In it we learn the truth about Batman’s successor, Terry McGinnis: that he has Bruce’s DNA coursing through his veins, making him the heir to the Batman mantle in more ways than one.

But that reveal is not the most powerful moment in the episode – not by a long shot. Amanda Waller tries to convince an infuriated Terry that Wayne is not as heartless as he believes by recounting Bruce’s final encounter with Ace, leader of the Royal Flush Gang, twenty years ago. Ace, a young girl with immense psychic powers, is only hours away from dying from a brain aneurysm that, in her agony, will likely cause her to destroy the city surrounding her. Batman is entrusted the responsibility of killing Ace before she loses control but he refuses, instead opting to sit with her and talk about their lives until her time comes.

It’s an incredibly human moment as the two characters share feelings of being cheated out of a childhood and hold hands while all of Ace’s psychic creations fade away as she calms down until eventually passing. We get to see the heartbreak in Bruce’s eyes as he carries the lifeless Ace out of the park, and it becomes clear in that moment that Batman does all that he does not out of revenge, addiction, or hatred of criminals, but because he believes in and cares about the goodness of people.

It’s why Batman is a shining – err, dimly lit and dark –  beacon of justice and will always be my favourite fictional character.

Now excuse me while I go play through Arkham Knight for the fourth time.