Oh Sonic, how the mighty have fallen.

Once the Sega superstar with attitude, able to go toe-to-toe with Super Mario, and now, well, have you seen Sonic Boom? The blue blur’s descent into mediocrity has been a tragic one, notably starting with his shaky transition into the 3D. But many fans still revere those first forays into the third dimension with Sonic Adventure released on the Dreamcast in 1998 and its 2001 sequel. These games are remembered fondly, and with each new 3D iteration of Sonic, many cry out for the series to return to its roots with a new Adventure game. But are these games really worthy of such praise, or is our nostalgia playing with our memories? After returning to these games recently through the magic of PSN, I can now say it’s the second. Definitely the second.

Honestly, I was also originally one of the many who held these past games in high regard. Who can forget fighting Chaos’ multiple forms throughout the different storylines, or blazing through loops at incredibly speed, and that famous killer whale chase through the docks. Oh the whale chase. And while these moments are still no doubt some of the best parts of the experience, they’re few and far between a slew of unappealing gameplay and story.

I’ve often wondered to myself where Sonic really went wrong in 3D, when Mario was able to go so right with Super Mario 64. Sonic Adventure makes this abundantly clear after replaying it, as I remembered the huge amounts of story and cutscenes that only serve to bog the game down. While the Mario games knew and played to their strengths, completely bypassing any narrative for a focus on fun gameplay, Sonic took the opposite path.

Sonic Adventure’s story is baffling. The tale of an ancient god returning to power to wreak havoc on modern-day isn’t offensive in its own right, but in execution is perplexing. Why is Sonic in the modern-day anyway? Over the years it seems Sonic Team is completely unsure of where these games take place, going from cartoonish absurd worlds filled with colourful creatures to literal city streets populated by normal humans. The juxtaposition between Sonic and his cast of friends between a relatively serious storyline that results in a flooded and destroyed city is laughable. Even worse is the way this story is presented, with stilted cutscenes filled with wooden animation, ill-fitting pop songs, and cringe inducing voice acting and pacing with multiple long, awkward silences. It may have been impressive for its time, but not only has it dated incredibly poorly, it started the entire modern Sonic series on a course filled with melodramatic storylines, that in retrospect may have been much more timeless without their inclusions.

I can’t help but wonder why Sonic games need these sensational storylines in the first place. He’s a speedy, blue hedgehog who saves woodland creatures from a crazy doctor and his robots. It’s silly, but so is saving a princess from another castle, and it’s all the motivation we need to get to the end of the level. Sonic Adventure is the point of origin for the overly serious narrative habit that would give way for Shadow the Hedgehog gunning down enemies and Sonic smooching human girls.

Perhaps what makes it all sting just a little more is that I always have and still do find the many of the 3D Sonic games fun, at least the actual parts where you play as the titular hero. Admittedly, Sonic plays loose and clumsy, moving too fast for delicate movements, spinning out of control and often breaking the world’s geometry, and fighting against an unwieldy camera. But when it does work, it’s fun and exciting to speed through courses. The inclusion of the homing attack is a nice addition to allow combat to remain simple and keep up the signature fast pace, even making for some fun obstacles when using enemies to traverse gaps and traps. It may revert to a rollercoaster ride at times, but I’ve always found it a visual treat watching the cinematic and grand maneuvers Sonic displays. It’s a formula that might have at least been a nice alternative to the slower, more methodical 3D Mario games if it were the only method of play. But Sonic unfortunately has to bring along his less talented friends.

Sadly, Sonic Adventure is also the beginning of a tradition of splitting modern Sonic games into multiple campaigns helmed by different characters. Alongside Sonic are returning secondary characters Tails, Knuckles, and Amy, alongside newcomers Big the Cat, and E-102 Gamma the robot. The best of the bunch is Tails, whose inclusion is harmless enough, with a twist on the Sonic gameplay in which instead of using fast speed, he can fly and shoot through floating rings to reach the destination. It would have made for a fun multiplayer mode reminiscent of the old-school 2D games, but sadly this is just the beginning.

I’ve always held a grudge against Knuckles’ gameplay segments; treasure hunts that have you gliding, climbing, and digging around for randomly placed chaos shards. These sections can be tedious and annoying as you fight the controls to perfectly specify the location of the each shard, and the random nature can mean the difference between these levels taking anywhere from a few minutes to half an hour.

Amy’s section plays like much slower Sonic levels, where you make your way through courses using her hammer to avoid Eggman’s robots and solving simple puzzles along the way. It’s not the worst gameplay in the world, but after playing through the more exciting Sonic levels, they can feel like an absolute drag.

Big the Cat’s infamous campaign has you play through a series of fishing mini-games that make me want to quit playing video games forever. They’re among the most incredibly aggravating and monotonous levels that I’ve ever played and I cannot understand their presence as a main storyline. Lastly is E-102 Gamma, who again takes a similar structure to Sonic, but instead moves much slower and has a focus on combat, destroying enemies and obstacles to clear a path, which in practice just consists of holding down the shoot button the entire level. 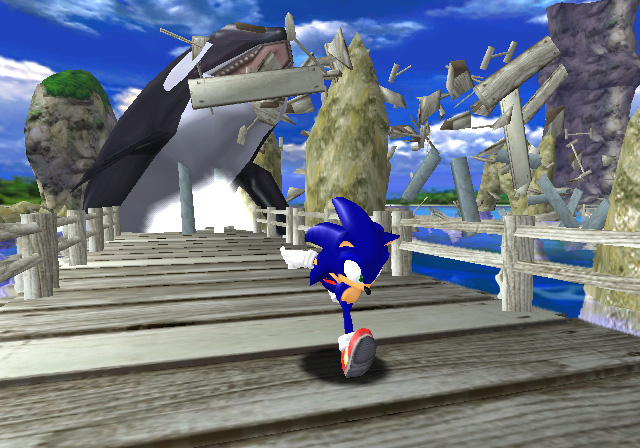 Most of these secondary levels have you backtracking through already familiar locations if you’ve beaten them as Sonic, so after playing the most fun and rewarding story, players can look forward to three additional lesser retreads and two more awful original ones. Unfortunately, every level has to be completed to unlock the last boss and ending, yes, even the fishing ones. If Sonic Team had focused their time and effort on a more fleshed out and longer Sonic levels, rather than split their attention on so many weaker ones, Sonic Adventure could have been a classic.

I may sound far too harsh on such an old and even innovative game for the time, but I held Sonic Adventure in high favour for a long time in my memory, and replaying it to realize that some of these innovations are actually the beginning of what would keep Sonic games down even to this day was jarring. There’s a fun game hidden beneath all the story and unnecessary additions, but even it is far too short to redeem anything else. It’s sad to see that not only have the following Sonic games not solved the problems present in Sonic Adventure, but leaned into them harder than ever in the subsequent installments.

Maybe a new Sonic Adventure wouldn’t be a return to form after all, and some of us have to accept that 3D Sonic games have never actually reached their potential. In the end, I think Sonic needs to take a long hard look at himself and who he is and come up with something truly novel before another forgettable release that simply relies on the Sonic Adventure formula.